When first looking at Gene Larew's Baby Mega Ring Shad it presented a challenge on how to rig it. The lure looked like it was going to have possibilities, but it was uncertain as to what the best approach would be to unlock the full fish catching potential.

The color being tested was green pumpkin with green flake, which is one of my favorites.

There were three lakes on which the lure was tested. One was shallow, with stained water, wood cover, and rip rap, another was deep, with clear water, cattails, and submerged weed, and the last was shallow, with clear water, moss, wood cover and submerged weeds. The water temperature in all of these lakes was in the 75 to 82-degree range. The techniques used were flipping, pitching, and casting.

The first rig tried was with a 2/0 Daiichi Bleeding Bait Copperhead hook. The head of the lure was attached to the spring screw device on the hook eye, and the point inserted so the lure’s body would be vertical to the hook. I thought this would work well for a jerk bait. The lure stayed perfectly up and down as if it were a swimming shad. There was one bass caught, and some strikes, but it wasn’t the best of producers.

From this point, a Texas rig using a 1/0 Xtra Strong XGap Xpoint hook, and 1/8 or 3/16 ounce slip sinker was tried. This was the most productive rig during the testing period. The hook was inserted so that the body laid horizontal, giving the big, paddle tail a waving action, much like a leech type lure. Bass and catfish were caught on this rig. 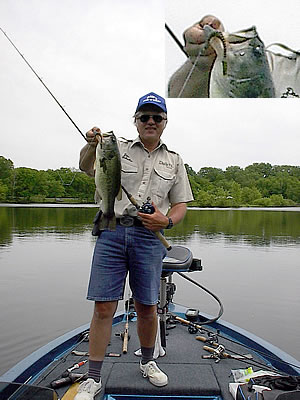 I also tried the lure as a trailer on a 3/16 ounce Gripper Hair/Rubber Jig. This caught a few bass along the edge of a weed line, but still didn’t out produce the Texas rig.

Durability was a drawback on the lure. Many times it was a one or two fish lure or was broken in two on a strike. The break would always come at the point where the hook was inserted.

The large rings were a benefit. These would act as a weed guard so that the hook point could be exposed through the main body. In fact, there were occasions when I inserted the hook in the rings alongside the middle portion and used them as the lure’s body. This seemed to somewhat eliminate the problem of the lure splitting on a strike, or catch. Another plus to these rings is for the use of fish attractant paste. I applied a small amount of Kodiak Minnow or Crawfish Paste between a couple of the larger middle portion rings.

It is still uncertain as to what this lure is supposed to represent, but on the lake with the moss and submerged weeds, some leeches were spotted. This is the area in which the fish were feeding heavily, and being that a 23 1/2 inches channel catfish was caught in this same area, it is highly likely that one of the primary imitations is a leech.

While this lure is short, the big rings and paddle tail provide a bulky profile. This, combined with the waving action when rigged horizontally, maybe the reason that it seemed to lure bigger bass. Fish measuring 15 to 18 inches were common, plus some much bigger ones were lost in heavy cover.

This is a lure that every bass angler should have rigged on a rod, so it is ready for a quick cast to a prime spot. It is a great lure on tough fishing days, as a follow up to missed strikes, and when fishing behind another angler.

Gene Larew’s Floating Series Finesse Craw performs well for catching fish but is not the most durable of lures. This is a trade-off for its great floating abilities.
There were three lakes on which the lure was tested. One was shallow, with stained water, wood cover, and rip rap, another was deep, with clear water, cattails, and submerged weed, and the last was shallow, with clear water, moss, wood cover, and submerged weeds. The water temperature in all of these lakes was in the 75 to 82-degree range.

I used colors of green pumpkin with green flake, and black with blue claws. The green pumpkin craws were rigged Texas-style with 1/0 and 2/0 XGap Xpoint and 2/0 Daiichi Bleeding Bait Copperhead hooks, and on 1/16 and 1/8 ounce lead head jigs. The black/blue craw was used as a trailer for a 1/4 ounce, black/blue, Mann’s Stone jig.

A 3/16 ounces Gambler Pro Ratlin’ Sinker was used with the Texas rig when flipping/pitching brush and working the lure through rip rap areas. On a pause, the lure would float upward, with the claws in a defensive position.

The floating ability was so great that the lure would float the 2/0 Copperhead hook on the surface when fishing without a weight. This makes a great lure for working over weedy and moss-covered areas. The claws stay on the surface, and when twitched, they look like kicking legs, which in turn makes a crawfish lure double for a frog. While the lure was not tested with a Carolina rig, it should be an excellent choice for that style of fishing.

Fish would strike and hold onto the lure, which made for a higher percentage of positive hook sets. I believe this can be attributed in a great part to the garlic and salt, which are in the lures. As mentioned earlier, the durability did create some problems. Points on thinner wire hooks would pull out easily while working the lure; claws, especially on the two colored lure, would come off without being struck by a fish; and fish would tear the back part off when rigged on the lead head jig.

To help eliminate this problem, to some extent, I used the thicker Xtra Strong 1/0 XGap Xpoint and 2/0 Copperhead hooks. These seemed to hold better and make the lure last longer. The Copperhead design, for those not familiar with this hook, has a spring type screw attached to the hook’s eye, which screws into the head of any soft plastic lure. During the testing period, the Gene Larew Finesse Craw accounted for several largemouth bass in the 12 to 18 inches size range. On one day it accounted for all the fish caught in the boat, while my partner did not catch a fish until I let him use one of the craws. Although not fishing water with smallmouth or Kentucky spotted bass, I’m sure they would be a perfect choice for these species.

Even with the durability problem, I would give this lure a 4 1/2 out of 5-star rating… learn more