Born and raised on the shores of Long Island, New York, Brendan Cucinello grew up saltwater fishing with his father Albert, a passionate fisherman. At the age of 16, he became interested in freshwater bass fishing. In 1996, he joined the Long Island Bassmasters and started competing in local bass fishing tournaments.

He has claimed over fifty (50) first place finishes in club and regional bass fishing tournaments. Beyond his many wins, he holds several local records and countless top ten finishes.

Brendan is the President and co-founder of Bassin' USA www.bassinusa.com, a complete online bass fishing resource dedicated to bass fishermen around the world.

Today, he lives on Long Island with his wife and their two lovely daughters. During the off season, Brendan can be found playing guitar and recording music in his studio. 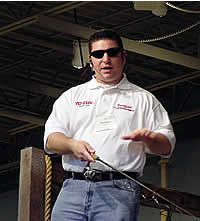 “Brendan is one of the areas best anglers, especially in the spring. His ability to put very large limits together is indeed most impressive. Of note is the 23 lb.,7 oz. limit he caught while a member of Suffolk County Bassmasters on Copake Lake in 2004 and the 22 lb.,8oz. limit he brought to our scales this past year on East Twin Lakes. He won the clubs 2008' Open Championship on Candlewood Lake with a more than a pedestrian bag of mixed bass that approached 34 pounds.”