In 1973 Dan Galusha, who had been fishing since he was 4 years old, wanted to enter the sport fishing industry on a career level, but was unsure how to start. He wrote to the top fishing personality of the time, Virgil Ward. Virgil answered by telling him to look at becoming a tackle representative, or writing for outdoor publications.
Dan wasn’t very successful in the sales part, and by 1978 decided to pursue writing, by starting DAN'S FISH 'N' TALES as a column in a small weekly newspaper. It eventually grew to an award winning magazine column. After being a guest on Virgil’s CHAMPIONSHIP FISHING SHOW, in 1984, the electronic media bug bit. Dan started hosting fishing segments for other outdoor shows and local newscasts. This lead to the award winning DAN’S FISH ‘N’ TALES portion of WQPT’s LIFE & TIMES (PBS). 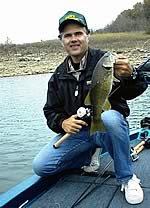 At the same time Galusha was hosting the radio version of DAN’S FISH ‘N’ TALES, which won five media awards.

So far, Galusha feels his top television achievement is the production and hosting of the PBS documentary, THE WORLD OF VIRGIL WARD. This show captured him another AGLOW Crafts Award.
Dan used his communications skills to help form Bass Wranglers, Inc., which was a family oriented bass tournament group. He also successfully competed in the events, placing in the top five year-end champions each year. Seminars are another outlet, either as a solo, or with fellow Bassin’ USA Pro Staff member, Johnnie Crain. 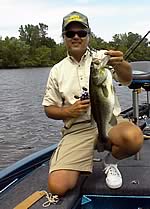 As for actual fishing awards – at this time he has 85 state fish awards, 12 World Records, 4 World Angling Achievements, and 2 Ozark Mountain Region fishing awards. He is only one qualifying fish away from being an Arkansas Master Angler. By the way, the majority of the awards, and all of the bass, are in the catch-and-release category.
Dan is working on a new DAN’S FISH ‘N’ TALES television series, that will entertain and teach in a manner which will encourage beginners to become interested in the sport of fishing. He also wants to find a new outlet for his radio program.